Resume Templates » Career Blog » Workplace gossip: why you should avoid it

Regardless of industry or gender: There is no workplace in the world where employees are not talked about behind the back of employees. Whether it’s the daring outfit of the management assistant at the corporate party, the alleged affair between two colleagues, or the boss’s sticking to ordering: we all gossip now and then – especially at work, where most people spend a large part of their time. The spectrum ranges from harmless, perhaps even benevolent, Gossip to malicious bullying. Even if nobody would like to admit that they regularly talk about other colleagues: Studies suggest that two-thirds of all human conversations revolve around people who are not present! But why do we like to talk about other people so much? What are the advantages and disadvantages of this inherent tendency? And how can we find a positive way of dealing with it in which no one is harmed?

Gossip and bullying – what’s the difference?

There are many terms related to this topic that is sometimes misused interchangeably. However, one should clearly distinguish them from one another: Gossip stands for “a form of social entertainment in which information is deliberately exchanged about people who are not present.” These are often unprovable and rumors, sometimes also deliberate misinformation that is supposed to be spread. On the other hand, gossip stands for aimless chatting and telling, not necessarily about other people. The situation is entirely different from Gossip, which contains a harmful component: Expressing oneself about someone (absentee) or something derogatory, with critical or malicious comments. Depending on the degree of malignancy and the frequency and type of practice, gossiping can quickly cross the line into bullying. This is the “repeated and regular, predominantly emotional harassment, torture and harming of an individual by a group or individual”. Spreading false facts about someone – as is common with gossip – can be counted as bullying, along with more “overt” forms such as humiliating the other person, inappropriate criticism, social exclusion, or assigning senseless tasks.

Why we like to talk about other people so much

Evolutionary psychologists consider our tendency to gossip (and thus sometimes to gossip) as an essential function for living together in a larger social group: Cooperation within the group is encouraged if everyone receives information about all other members – especially about “non-cooperative” or in some form “out of line” individuals. The researchers explain that people particularly enjoy gossiping about bosses and executives as follows: We would also like to find out private to intimate details about social leaders because insights into tensions in the management hierarchy are of enormous importance for each group member and the group as a whole, and precise be registered. What can be seen as positive about gossip is that it can strengthen cohesion within the group of initiates – by deliberately differentiating themselves from the people they are talking about.

But that was about the positive. Because in addition to this group-preserving function of speaking about others, evolutionary psychologists also see opposing reasons for the widespread of gossip: In the competition for essential resources- for example, the next higher position. Gossip is a covertly aggressive, little time-consuming tactic to secure an advantage. According to studies, women mainly take advantage of this to make rivals less attractive to the opposite sex by damaging their reputation. Of course, such behavior can also occur regardless of gender.

The dangers of gossiping at work

Anyone who spreads rumors a lot at work will damage themselves in the long term – even if the conversations seem harmless at first. Because this behavior shows others that you are not particularly trustworthy yourself – whoever is so mean about others, you potentially do the same to his colleagues whom he is now taking into his trust. So it is not unlikely that others will notice the “hat talk” about third parties negatively, so they will turn to the boss. Consequences under labor law such as a warning can then be the result. But even if it doesn’t get that far, gossip spreads lousy energy in the environment and shows weakness and a lack of self-confidence. Because whoever has to criticize others repeatedly to upgrade himself has a problem with himself.

Ultimately, the devastating consequences that bullying can have on its victims should be mentioned: With vicious Gossip, you can not only ruin a colleague’s job but also massively impair his mental health, up to and including depression. This should be enough as an argument to avoid Gossip – at work and in general – as much as possible! Repentance and feelings of guilt reduce your self-esteem and weaken your energy balance. To be sincere, honest, and loving may take more courage, but it also gives you more peace and strength.

How to avoid the gossip trap at work

If the content of conversations about third parties is neutral or even benevolent, nobody is harmed as a rule, and it is not to be recorded under “gossip”. Nevertheless, it should be decided with a sense of proportion and sensitivity whether such conversations have to be. Conversations with a negative focus on others, on the other hand, should be avoided entirely. It sometimes takes an effort not to get carried away, but it makes you feel much more energetic at work – and clearer conscience for yourself. The following rules will help you to be mature and constructive on this topic.

Focus on the good in others. Would you say what you just wanted to say about your colleague to her face as well? No? Then you’d better keep it to yourself.

A colleague recently reported to several people in the kitchen that he has now started training and is particularly effective. This is not secret information because he has stated it openly, and it is also something positive. Should you now report this to your other colleague who has just returned from vacation? Counter-question: Is there any use in passing on this information? Often everything is randomly passed on to others, although this is not particularly exciting and offers the recipient of the data no added value. Not everything has to be shared with others! Only pass on information that is important for your mutual collaboration.

What doesn’t work at all, and what you may even have to deal with consequences under labor law, is the passing on of confidential information. If you work with personal customer data in your industry, you have usually already signed a confidentiality clause in your employment contract. Failure to do so can result in you being dismissed without notice! Private information about bosses and work colleagues and decisions that have not yet been officially communicated should never tell anyone else! So be sure to keep such things to yourself!

Stick to the truth

Even if the topic you want to get rid of among your favorite colleagues is positive, potentially helpful, and not sensitive information: only express it when you can be sure that it is true!

Distinguish yourself from blasphemous colleagues or confront them

It’s one thing not to start gossiping proactively. Just as important, however, is how you react if employees try to entice you into Gossip. It takes personal strength and a certain amount of courage, but you should raise your voice to point out the unsightly behavior. You can also try to pull yourself out of the affair in a subtle way – for example, by contrasting the negative statements of your colleagues about an absent person with “I think she/he is competent/nice.”. However, this vague approach does not represent a precise positioning. Please encourage your colleagues – without pointing too much with a raised index finger – not to speak so negatively about others. This is how you constructively motivate others to reconsider their actions without judging them morally. 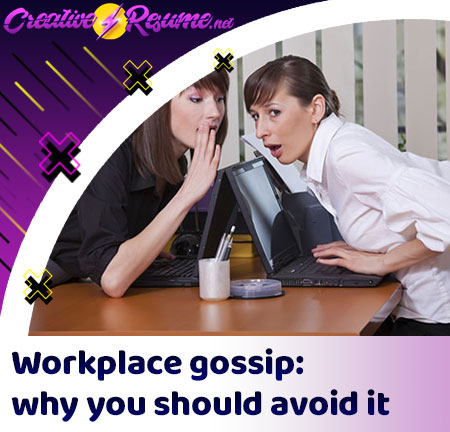 Article Name
Workplace gossip: why you should avoid it
Description
There is no workplace that does not gossip. We show why people behave this way and why they shouldn't do it.
Author
Robert Miller
Publisher Name
creativeresume.net
Publisher Logo